Thoughts in a page

A male friend asked me, “why would a guy want to attend Grace Hopper?” It’s a fair question, one I even asked myself before buying my ticket. I told him: Equality isn’t just a woman’s issue. Men need to be involved if change is going to occur. Even sitting on the sidelines prevents progress. The more men that get involved and advocate, the more likely we can improve things and the better off we will all be.

Having said that, it crossed my mind, “should I be taking a ticket away from a woman?” Honestly, I still feel a little badly about this, especially as I saw women trying to get tickets up until the conference began, but the encouraging reception I received from female attendees reinforced my decision, they want men to be involved.

As a man, I was definitely in the minority; I estimate there were three to five hundred men walking around amidst the 20,000 attendees. It’s worth noting this provided me a very tiny window into what women in tech experience every single day: there only being a few people, if any, in the room who look like me. This is exactly the type of experience that builds empathy, and I encourage any man to attend.

I focused on sessions around diversity and inclusion, wanting to expand my experiences, build empathy, and continue to learn how to be an ally. When those weren’t available for a time slot, I chose sessions that interested me, some of which I even knew the presenters.

One key takeaway was the sincerity of everyone involved. The presenters were genuinely interested in being there and discussing their topics, eager to speak with audience members afterwards. The attendees (mostly women) were welcoming and open to others around them, sharing personal experiences and connecting with authenticity. I felt welcome to be present and encouraged to participate. 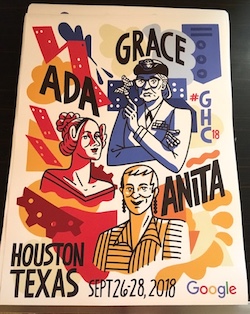 Notes about each session I attended are found below, but it’s worth calling out that Male Allies was well worth the time. The room was pretty full (150-300 people) and split almost fifty-fifty across gender. The moderator and four panelists had a great discussion covering misconceptions about male allyship, examples of good and bad allies, being an ally when it comes to hiring practices, and the seemingly inevitable question of navigating relationships with female colleagues after the #metoo movement (most men know how to act…be a good human). An interesting note, one panelist said there were more men in this year’s Male Allies session then he remembers seeing at the whole conference last year.

I’ve never attended a conference of this size. With over 20,000 attendees this is an absolutely huge conference, especially intimidating for an introvert. Getting from one session to another often meant a 20 minute walk. By the end of the four days, I was physically and mentally exhausted, yet intellectually energized and hopeful for our future. 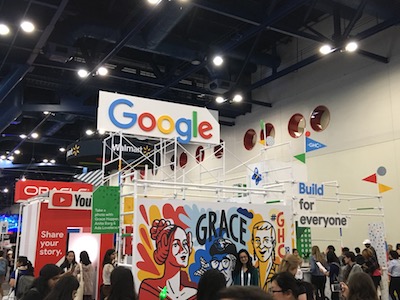 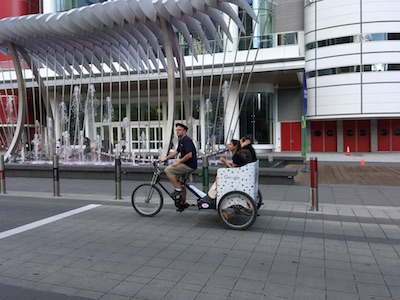 How to be an ally

A huge warehouse party for Google employees the Tuesday night before the conference began, with food, drinks, games, art, and ~800 Googlers. Very cool.

Ability is universal, opportunity is not. 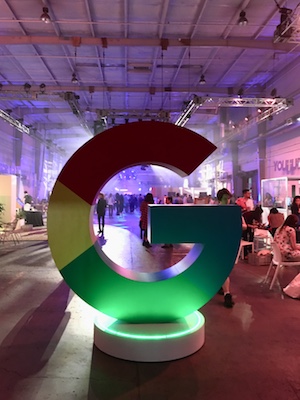 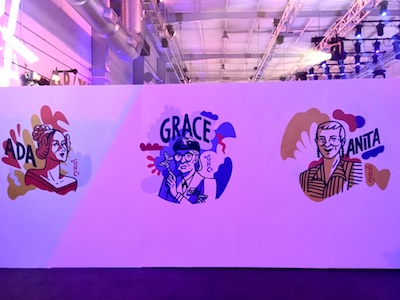 This is what 20,000+ women (and a few hundred men) look like in Houston’s Toyota Center.

Padmasree Warrior (@padmasree), CEO of NIO U.S., emphasized how “mobility means freedom” for everyone, especially women. Software defined hardware is the combination of the two disciplines and the future of technological growth. She was an engaging speaker with entertaining stories and wise words of advice.

Jessica Mathews (@jessomatt), founder of Uncharted Power at 22 years old, had boundless energy on stage and it was contagious. Describing herself, she “aspires to be the love child of Beyoncé and Bill Nye the Science Guy.” She didn’t plan to found a company or start a business, she merely followed her passion to help others (bringing power to areas without it) when she was doing a class project while attending university. She developed a soccer ball (the Soccket) that used kinetic energy to charge a battery which could then be used to power other electrical items in homes. When she discovered girls weren’t able to play outside after the age of 12 in a refugee camp, she created a jump rope (the Pulse) to do the same thing and even demonstrated it on stage (see 1:08:01 in the keynote video).

If I wasn’t a black woman, I don’t think I would have gotten this far. Being underestimated was the best thing that has ever happened to me.

Mariana Costa Checa (@mcostach), co-founder of Laboratoria in Peru, was the Abie Award winner for Change Agent and told the story of how their company was started. Laboratoria helps women in Latin America develop careers in tech through various bootcamps.

Solve for X, a spoken word poem performed by Amira Smith (see 1:27:40 in the keynote video). Very well done and worth watching! 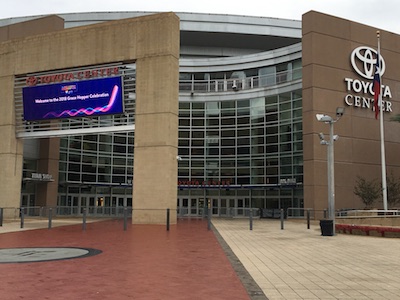 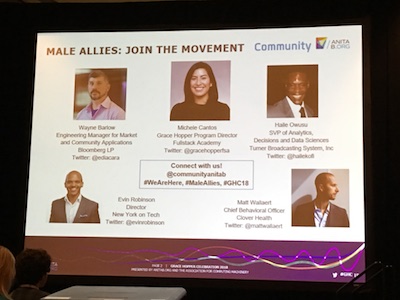 This was a great discussion, especially for men new to the concept of calling themselves an ally.

The misconceptions about being a male ally:

Examples of being an ally:

How an ally can improve hiring practices:

An audience member asked for thoughts on navigating relationships with female colleagues after the #metoo movement.

Haile: We can’t fix the problems of inequity by treating everyone the same, you’ll end up stabilizing the existing situation.

How Will Tech Power Up an Inclusive Workforce? 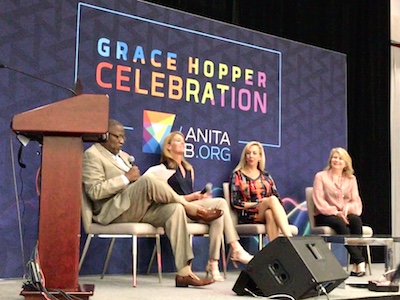 The session started with a viewing of the trailer for Bias, a new documentary by Robin Hauser, the director of Code: Debugging the Gender Gap (available on Netflix). They described unconscious bias as a survival heuristic and posed the question of whether or not we can get away from our “like me” bias. People don’t think we’re bias, it’s difficult to see our own biases.

The panelists went on to discuss the bias already present in AI because of the lack of diverse developers creating it. We need to have a diverse group creating machine learning algorithms to avoid inherent bias.

The Art of Self-Promotion 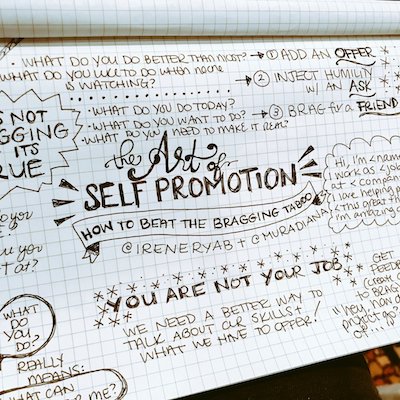 Describing herself as a professional feminist after experiencing the misogyny in the venture capital industry, Irene Ryabaya gave an engaging presentation about promoting yourself. Some takeaways:

It was wonderful to meet and chat with other Googlers that are passionate about equality in our industry. An early morning start, but well worth the effort to connect. Each table included 7-9 Googlers and an executive, opening up discussions to gain insights into managements thoughts on diversity, GHC, and any topic that came to mind. My table group included David Lieb (@dflieb), Product Director of Google Photos and (previously) co-founder/CEO of Bu.mp. 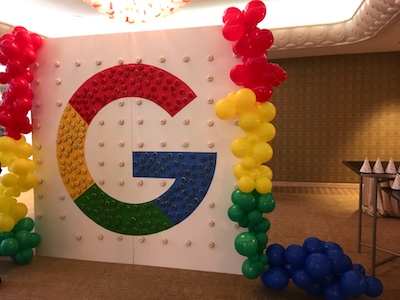 Falling Into Tech: The Non-Traditional Path

As someone with a B.S. in Accounting who first moved into technology in the late 1990’s by learning system administration on the job (in my accounting firm), a lot of reading, and taking trade classes, I was particularly interested in hearing these women’s stories.

Key takeaway: You don’t have to be a software developer to work in the technology field. In fact, bringing other areas of expertise to the field increases diversity and improves the experience for everyone. There are many other opportunities in the industry! Spend time finding out what they are by talking with people in the industry, reading articles, listening to podcasts, combing job postings, and then keep your interests, education, and experience in mind to find a good fit. 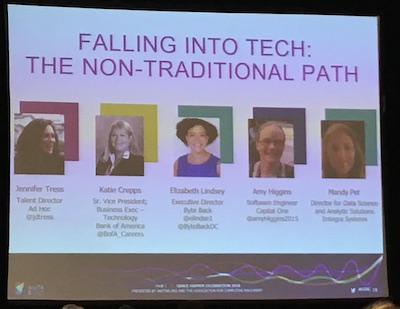 What drew you into tech?

People don’t remember content, they remember how you made them feel.

People will find you online. Don’t try to create separate personas for your personal and professional sides.

How to Foster an Authentic and Consistent Personal Brand

Your brand is what people say about you when you’re not in the room.

This was an interesting discussion with women who have started their own successful businesses and risen to executive ranks in companies. Topics such as how they transitioned into technology, combatted the naysayers, took control of their personal brand, and handled misinterpretations of it.

Changing the Tires at 60 MPH - A User Migration Story

I worked with Beilan at HBO when she was engaged on this project. They had to migrate all of the users (millions) from HBO Now, serviced completely by a third party, to the infrastructure built in-house by HBO for HBO Go. It was fascinating to see her explain the depth and care with which her team approached this gargantuan task. She also used some entertaining Game of Thrones examples to make a point about the difficulties of handling name changes in the middle of a migration (hint: Jon Snow).

An Introvert’s Guide to Networking

As an introvert, this is something I’ve had to focus on over the years. It’s not easy to move yourself outside of your comfort zone and handle the stereotypical networking events. 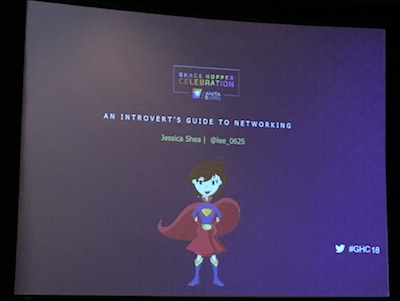 My personal strategy: I’ve found that I get little personal benefit from large networking events, preferring to connect one-on-one. I enjoy interacting with people individually and make time for that in my daily work hours. Having coffee or lunch with a different person every week eventually builds a good sized network and doesn’t stress me, quite the opposite, I enjoy connecting with others on this level. Reach out to people with a sincere ask or goal and they’ll usually be happy to meet. Sincerity is key to creating a solid network. And remember to pay it forward when you’re in a position to.

Recommendations from the working group and presenters:

Breaking Up the Boys’ Club of Silicon Valley

This industry has an obligation to be what the next generation needs to see. 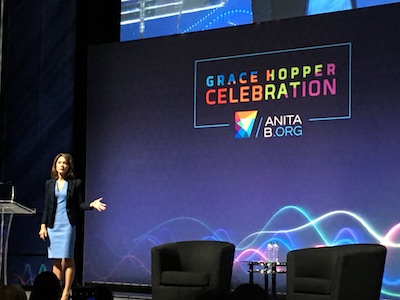 Emily was an engaging speaker with an interesting tale of how her book began and the experiences while writing it. The following are some highlights from her presentation and the Q&A.

Team Up for (Un)comfortable Conversations at Work

While working together at Atlassian, Claire and Shannon felt a need to connect with other women in the company and began Women Wednesdays. It was a monthly meeting where women and allies were welcome to come together for discussions about all sorts of topics, but diversity was one of the most prominent. They made sure that the meetings were a safe environment and the discussions were confidential (no notes or recordings).

One topic that took a significant amount of time in our working group was how women tend to say “sorry” more frequently than men and when they don’t really mean to apologize, rather, they’re using it as a means of being polite. Almost everyone at my table admitted to doing this repeatedly and when they shouldn’t have. Why Women Apologize and Should Stop, in the New York Times.

Recommendations for creating a meeting series in your own company/group:

My team, Cloud Docs, has a weekly gender diversity discussion group that incorporates several of these suggestions. At the moment, we’re reading through a book (we voted on) and discussing a chapter each week. In any given week, probably half of the people don’t read the chapter, but can relate to and engage in the discussion, regardless. I really enjoy the discussions and miss the weeks we don’t meet. It has been a great way to know some of the people in my team who have similar views about diversity. Some of our discussions have lead to initiatives beyond the scope of the meeting group.

About 8 of us handed out 5,000 t-shirts in 1 hour! It was a little bit insane and I didn’t have much of a voice left afterwards. We also handed out drawstring backpacks, glow stick necklaces, glowing glasses, and glow bars (the size of a small umbrella) that were lighting up the rest of the party for hours. 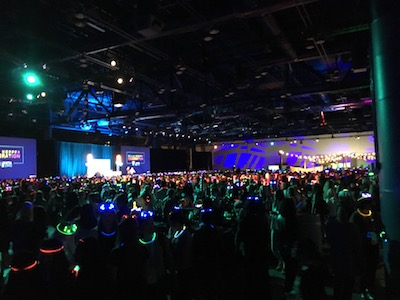 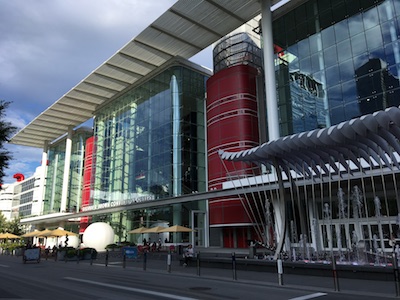