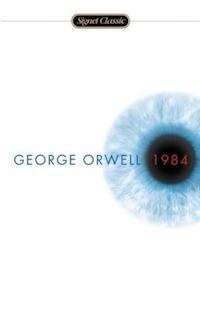 A classic novel by George Orwell (Eric Arthur Blair), it portrays the gradual evolution of the 1940’s world as we knew it into a dystopian society of 1984. With a romance thrown in to pin the story to humanity’s most precious emotion, love, this is a telling tale of what happens when we, the people who make up society, lose our ability to think critically and act with free will. Consider it fair warning to those who believe in or vote for despots, wanna-be-dictators, or oligarchies in the making.

It’s a beautiful thing, the destruction of words. Of course the great wastage is in the verbs and adjectives, but there are hundreds of nouns that can be got rid of as well. It isn’t only the synonyms; there are also the antonyms. After all, what justification is there for a word which is simply the opposite of some other word? A word contains its opposite in itself. Take “good”, for instance. If you have a word like “good”, what need is there for a word like “bad”? “Ungood” will do just as well—better, because it’s an exact opposite, which the other is not. Or again, if you want a stronger version of “good”, what sense is there in having a whole string of vague useless words like “excellent” and “splendid” and all the rest of them? “Plusgood” covers the meaning; or “doubleplusgood” if you want something stronger still.

In the end the Party would announce that two and two made five, and you would have to believe it. It was inevitable that they should make that claim sooner or later: the logic of their position demanded it.

Freedom is the freedom to say that two plus two make four. If that is granted, all else follows.

From the moment when the machine first made its appearance it was clear to all thinking people that the need for human drudgery, and therefor to a great extent for human inequality, had disappeared. If the machine were used, deliberately for that end, hunger, overwork, dirt, illiteracy and disease could be eliminated within a few generations.

For if leisure and security were enjoyed by all alike, the great mass of human beings who are normally stupefied by poverty would become literate and would learn to think for themselves; and when once they had done this, they would sooner or later realise that the privileged minority had no function, and they would sweep it away. In the long run, a hierarchical society was only possible on a basis of poverty and ignorance.

In our own day they are not fighting against one another at all. The war is waged by each ruling group against its own subjects, and the object of the war is not to make or prevent conquests of territory, but to keep the structure of society intact.

The aims of the three groups are entirely irreconcilable. The aim of the High is to remain where they are. The aim of the Middle is to change places with the High. The aim of the Low, when they have an aim—for it is an abiding characteristic of the Low that they are too much crushed by drudgery to be more than intermittently conscious of anything outside their daily lives—is to abolish all distinctions and create a society in which all men shall be equal. Thus throughout history a struggle which is the same in its main outlines recurs over and over again.

There are only four ways in which a ruling group can fall from power. Either it is conquered from without, or it governs so inefficiently that the masses are stirred to revolt, or it allows a strong and discontented Middle group to come into being, or it loses its own self-confidence and willingness to govern. These causes do not operate singly, and as a rule all four of them are present in some degree.

When discussing how an oligarchy works using doublethink:

To tell deliberate lies while genuinely believing in them, to forget any fact that has become inconvenient, and then, when it becomes necessary again, to draw it back from oblivion for just so long as it is needed, to deny the existence of objective reality and all the while to take account of the reality which one denies—all this is indispensably necessary.

It need hardly be said that the subtlest practitioners of doublethink are those who invented doublethink and know that it is a vast system of mental cheating. In our society, those who have the best knowledge of what is happening are also those who are furthest from seeing the world as it is. In general, the greater the understanding, the greater the delusion: the more intelligent, the less sane.

If human equality is to be for ever averted—if the High, as we have called them, are to keep their places permanently—then the prevailing mental condition must be controlled insanity.

Reality exists in the human mind, and nowhere else. Not in the individual mind, which can make mistakes, and in any case soon perishes: only in the mind of the Party, which is collective and immortal. Whatever the Party holds to be truth, is truth. It is impossible to see reality except by looking through the eyes of the Party.

Can you not understand, Winston, the individual is only a cell? The weariness of the cell is the vigour of the organism. Do you die when you cut your fingernails?

Power is inflicting pain and humiliation. Power is in tearing human minds to pieces and putting them together again in new shapes of your own choosing. Do you begin to see, then, what kind of world we are creating? It is the exact opposite of the stupid hedonistic Utopias that the old reformers imagined. A world of fear and treachery and torment, a world of trampling and being trampled upon, a world which will grow not less but more merciless as it refines itself. Progress in our world will be progress towards more pain.

Always, at every moment, there will be the thrill of victory, the sensation of trampling on an enemy who is helpless. If you want a picture of the future, imagine a boot stamping on a human face—for ever.