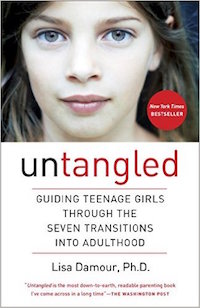 Dr. Lisa Damour breaks the topic of girls’ adolescence into seven stages, allowing the reader to see the progression from child to young woman during the formative teen years. She writes in a conversational tone making it easy for the reader to follow. Describing several anecdotal stories from her decades of practicing psychology, Dr. Damour gives the reader multiple ways to handle scenarios they’ll encounter in everyday life with their teenage girl.

She concludes each topic with succinct examples of when to worry about your daughter. I found these particularly helpful, especially since I won’t always know what to look for in my daughter’s behavior, attitude, or actions.

Untangled should be read by every parent as their daughter enters middle school or junior high! It’s that well written, pertinent to your life, and important for your daughter’s future womanhood.

Further below you will find quotes and ideas from each area of the book that I found helpful and/or interesting. It’s a long list to go through, yet it provides a resource for later review. I’ve found that repetition is one of the best ways for me to change my behavior and this comprehensive list will allow me to revisit the topic.

Before I get into the details, here are some of the high-level golden nuggets.

And now for the comprehensive list of interesting ideas and quotes from each chapter. Particularly interesting ones are in bold.

Planning for the Future