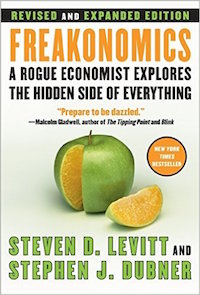 I could not believe how fast this book read. I started it on a Thursday and finished it the following Saturday afternoon. Especially for a book on economics…I am completely astounded at how easy this was to read and comprehend. The authors have a knack for taking the complicated and translating it into layman’s terms that make sense and deliver their points succinctly. Economics is not the sexiest topic nor is it the easiest to comprehend, but the two Steves actually made it interesting and thought provoking.

Look at these chapter titles, does this sound like an economics book?

Here are some interesting pieces of information taken from the book:

There are enough guns in the United States that if you gave one to every adult, you would run out of adults before you ran out of guns. Nearly two-thirds of U.S. homicides involve a gun, a far greater fraction than in other industrialized countries. Our homicide rate is also much higher than in those countries….In Switzerland, every adult male is issued an assault rifle for militia duty and is allowed to keep the gun at home. On a per capita basis, Switzerland has more firearms than just about any other country, and yet it is one of the safest places in the world. In other words, guns do not cause crime.

Cheating is a primordial economic act: getting more for less…. Consider what happened one spring evening at midnight in 1987: seven million American children suddenly disappeared…. It was the night of April 15, and the Internal Revenue Service had just changed a rule. Instead of merely listing each dependent child, tax filers were now required to provide a Social Security number for each child. Suddenly, seven million children…vanished, representing about one in ten of all dependent children in the United States.

The following made me laugh-out-loud.

Had the Internet been around when Kennedy infiltrated the Klan, he probably would have rushed home after each meeting and blogged his brains out.

Consider the parents of an eight-year-old girl named, say, Molly. Her two best friends, Amy and Imani, each live nearby. Molly’s parents know that Amy’s parents keep a gun in their house, so they have forbidden Molly to play there. Instead, Molly spends a lot of time at Imani’s house, which has a swimming pool in the backyard. Molly’s parents feel good about having made such a smart choice to protect their daughter…. The likelihood of death by pool (1 in 11,000) versus death by gun (1 in 1 million-plus) isn’t even close: Molly is roughly 100 times more likely to die in a swimming accident at Imani’s house than in gunplay at Amy’s.

Compare the four hundred lives that a few swimming pool precautions might save to the number of lives saved by far noisier crusades: child-resistant packaging (an estimated fifty lives a year), flame-retardant pajamas (ten lives), keeping children away from airbags in cars (fewer than five young children a year have been killed by airbags since their introduction), and safety drawstrings on children’s clothing (two lives).

Fryer cites the recollections of a young Kareem Abdul-Jabbar, known then as Lew Alcindor, who had just entered the fourth grade in a new school and discovered that he was a better reader than even the seventh graders: “When the kids found this out, I became a target…. It was my first time away from home, my first experience in an all-black situation, and I found myself being punished for everything I’d ever been taught was right. I got all A’s and was hated for it; I spoke correctly and was called a punk. I had to learn a new language simply to be able to deal with the threats. I had good manners and was a good little boy and paid for it with my hide.”

The preceding is taken out of a section discussing the black-white income and education gaps. I found Kareem’s experience with discrimination interesting.

…a child with many books in his home has indeed been found to do well on school tests. But regularly reading to a child doesn’t affect test scores.

I found that particularly interesting and his explanation is way too long to put here…so go read it.

This quote sums up the book nicely.

What this book is about is stripping a layer or two from the surface of modern life and seeing what is happening underneath.

Check out more of their work at Freakonomics.com.