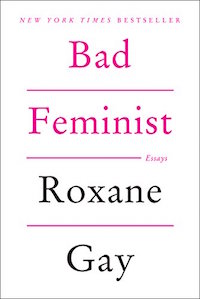 My favorite definition of “feminist” is one offered by Su, an Australian woman who, when interviewed for Kathy Bail’s 1996 anthology DIY Feminism, said feminists are “just women who don’t want to be treated like shit.”

Roxane Gay writes in a casual, intellectual, and engaging manner that keeps your attention. The essays challenge your presumptions, often with dry wit and in-depth analysis derived from her education, observations, and life experiences. Her biographical stories and anecdotes are entertaining and enlightening, allowing you to empathize with her various experiences.

This book significantly impacted my perspective on feminism. In particular, the challenges of advocating feminism in our world. We all have different experiences and perspectives which drive our expectations. Gay has spent a lot of time and brain power deciphering exactly what feminism means to her, especially as compared to the feminist stereotype.

I disavowed feminism because I had no rational understanding of the movement. I was called a feminist, and what I heard was, “You are an angry, sex-hating, man-hating victim lady person.”

Precisely because she doesn’t feel as though she fits the stereotype nor does she react to every scenario as she views a feminist should, she describes herself as a bad feminist. Gay uses these essays to empower herself and the reader to embrace her/their imperfections while still being a feminist.

How did this book affect me? It opened my eyes in ways I didn’t expect.

Like so many others in this world, after my parents divorced I was raised primarily by a single mother. That experience ingrained in me a sense of feminism that I didn’t even realize was there for many years. While I have always respected women, appreciated them for who they are, treated them fairly, and supported equality at every opportunity I was aware of, I never really thought of myself as a feminist.

Perhaps it’s a larger hurdle to leap because I’m a man. I’m supposed to adhere to idiotic and outdated rules of masculinity if I want to keep my man card. In a way, labeling myself a feminist is the antithesis of the societal norms I experienced growing up in rural Illinois and the urban yet deeply-southern-in-beliefs Houston, Texas. Not all, but most of the men around me upheld those expectations while the boys strived to meet them. I suppose that makes for a long journey to embracing yourself as a man and a feminist.

Gay’s descriptions gave me a better understanding of a woman’s experiences, as well as those of a black woman. For her it’s a double whammy. Her life is filled with peoples’ reactions to her both as a woman and a woman of color. Bias is present in our society and government, without a doubt, meanwhile her essays provided a personal frame of reference to the subject. Her view on current movies and books that deal with racism were eye-opening. They often exposed the narrow scope and hypocritical story of enlightenment that the public embraced. Her analysis made me question why I enjoyed the movies she ridiculed. I don’t have a definitive answer yet.

While not all of the essays resonated with me, the collection is well worth reading. Especially for those who are looking to understand feminism from a slightly different angle than the stereotypical one. The takeaway from Roxane is that your view of being a feminist can be your own and still be valid.

After reading this, I find that I’m a bad feminist too.

Read my thoughts on specific chapters and quotes that caught my attention in this post: Bad Feminist Quotes and Thoughts