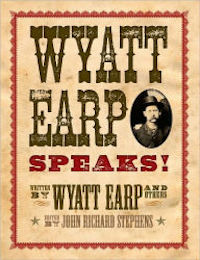 John Richard Stephens does his best to tie together the real story of the gunfight at OK Corral and its participants with information from several disparate sources. While the events are interesting, unfortunately, it feels disjointed in its delivery. Perhaps I’m jaded by Hollywood’s popular renditions of the gun slinging hero.

It’s an interesting collection of articles and letters written by Wyatt Earp, along with several articles and interviews of the man by others. The author clearly denotes the few that are from questionable sources, describing why they lack credibility. He includes them to provide a sense of the publicity that Earp had to live with for the rest of his life after the famous gunfight. Stephens has clearly done his homework and put a lot of effort towards telling the truth of what happened.

The author includes letters by and interviews with a few notable compatriots of Wyatt’s: Doc Holliday, Bat Masterson, and even an elderly woman claiming to have been Big Nose Kate 40 years later. They’re all entertaining.

There are pictures of Wyatt and the others throughout the book. It was a nice touch, giving us faces to go with the names.

Worth noting, my hardback edition was missing pages 96-160. I turned page 95 only to land on page 33 for the second time. Pages 33-95 were printed in two sections, back to back, and then I had to start at page 161. My copy was printed by Fall River Press of Sterling Publishing in 2015.