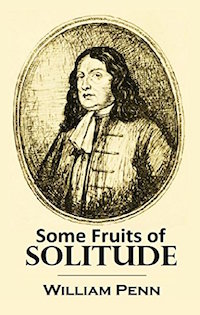 There is nothing of which we are apt to be so lavish as of Time, and about which we ought to be more solicitous; since without it we can do nothing in this World.

Written in the 1600s by William Penn, the book is full of archaic English grammar and spelling. As might be expected, since Penn was a prominent Quaker, the book contains an overwhelming amount of religious overtones and references. This is hinted at in his description, saying the book contains “Hints that may serve the reader for texts to preach to himself upon.”

An interesting aspect of the book being written in the 1600s is that he deals, somewhat frequently, with the Master-Servant relationship. In a few of the aphorisms, it even felt like he was comparing the Master to God in the relationship. This actually made me a little uncomfortable, the thought of dealing with a more strictly caste society than I’m familiar.

While I found parts of it intersting, it’s short(ish) length is the only reason I finished it (2-3 hours reading time). It wasn’t difficult to read, but the archaic grammar often required focus in order to translate and process. I found myself re-reading sections because they didn’t make much sense in the first pass. Quite honestly, most of the quotes have present-day interpretations that you can easily find on Pinterest. Having said that, I did enjoy putting myself into a different perspective, consuming words of wisdom written by a man almost 400 years ago.

The following are aphorisms I found interesting. They are taken as seen in the text; spelling, capitalization, and grammar as written by Penn.

For maxims is what the book is made of;– short sentences, briefly expressed hints, aphorisms, apothegms.

He advocated free play and open-ended learning for children.

8. Children had rather be making of Tools and Instruments of Play; Shaping, Drawing, Framing, and Building, &c, than getting some Rules of Propriety of Speech by Heart: And those also would follow with more Judgment, and less Trouble and Time.

Take care of your mind (or perhaps he intended faith and religion), as well as your body.

24. He is curious to wash, dress and perfume his Body, but careless of his Soul. The one shall have many Hours, the other not so many Minutes.

This is akin to one of my favorite maxims, “judge yourself before you judge others.”

41. We are apt to be very pert at censuring others, where we will not endure advice our selves. And nothing shews our Weakness more than to be so sharp-sighted at spying other Mens Faults, and so purblind about our own.

Mind your money well and be frugal, but also be charitable with it.

50. Frugality is good, if Liberality be join’d with it. The first is leaving off superfluous Expences; the last bestowing them to the Benefit of others that need. The first without the last begins Covetousness; the last without the first begins Prodigality; Both together make an excellent Temper. Happy the Place where ever that is found.

Don’t focus too much on how you look or spend too much on such purchases, for there are others who lack the funds or ability to even buy the essentials.

73. Excess in Apparel is another costly Folly. The very Trimming of the vain World would cloath all the naked one.

85. Men are generally more careful of the Breed of their Horses and Dogs than of their Children.

This may be interpreted in different ways, I believe he’s advocating that you marry someone who is also your friend. The previous entries dealt with marriage, although listed under the section of Avarice (def: insatiable greed).

94. Sexes make no Difference; since in Souls there is none: And they are the Subjects of Friendship.

Not the typical male perspective on marriage at the time, he disagrees with men dominating their wives.

100. Between a Man and his Wife nothing ought to rule but Love. Authority is for Children and Servants; yet not without Sweetness.

And advocates maintaining your relationship through love.

101. As Love ought to bring them together, so it is the best Way to keep them well together.

Qualities of a Friend

All fine characteristics we should look for in our friends.

And those to avoid. In this instance and time period, I believe Talkative is synonymous with revealing private information or being untrustworthy.

113. The Covetous, the Angry, the Proud, the Jealous, the Talkative, cannot but make ill Friends, as well as the False.

Be this, don’t be that. Be careful in whom you put your highest trust.

119. Be Reserved, but not Sour; Grave, but not Formal; Bold, but not Rash; Humble, but not Servile; Patient, not Insensible; Constant, not Obstinate; Chearful, not Light; Rather Sweet than Familiar; Familiar, than Intimate; and Intimate with very few, and upon very good Grounds.

Keep our thoughts and selves safe by not blurting out anything that comes to mind.

129. Silence is Wisdom, where Speaking is Folly; and always safe.

Listen before you speak.

130. Some are so Foolish as to interrupt and anticipate those that speak, instead of hearing and thinking before they answer; which is uncivil as well as silly.

Think before you speak.

131. If thou thinkest twice, before thou speakest once, thou wilt speak twice the better for it.

This one relates well to another of my favorite sayings, “assume positive intent.” Also, don’t believe everything you see, hear, or read until you’ve thoroughly verified it.

145. Believe nothing against another but upon good Authority: Nor report what may hurt another, unless it be a greater hurt to others to conceal it.

You are the only one who can keep your secrets. Once you tell even a single other person, it’s liable to betrayal.

147. Only trust thy self and another shall not betray thee.

Demonstrates that knowledge is not always the same as wisdom.

165. There are some Men like Dictionaries; to be lookt into upon occasions, but have no Connection, and are little entertaining.

He was a critic, or at least wary, of the wealthy, going so far as to say the inverse relationship between wealth and character increases proportionately. The more money someone has the less likely they are to have a virtuous character.

219. To be sure Virtue is but a Supplement, and not a Principal, in their Portion and Character: And therefore we see so little Wisdom or Goodness among the Rich, in proportion to their Wealth.

Be patient and work hard.

Yet be cautious and realistic in your optimism.

235. Never give out while there is Hope; but hope not beyond Reason, for that shews more Desire than Judgment.

Enjoy what you have.

249. Too few know when they have Enough; and fewer know how to employ it.

I rarely use the word hate, as it sounds so finite and harsh. Penn seems to agree.

269. Dislike what deserves it, but never Hate: For that is of the Nature of Malice; which is almost ever to Persons, not Things, and is one of the blackest Qualities Sin begets in the Soul.

286. He that won’t hear can’t Judge, and he that can’t bear Contradiction, man, with all his Wit, miss the Mark.

287. Objection and Debate Sift out Truth, which needs Temper as well as Judgment.

We shouldn’t fear that which we don’t understand.

308. Neither despise, nor oppose, what thou dost not understand.

Lead through kindness instead of criticism.

346. Besides, Experience tells us, That Goodness raises a nobler Passion in the Soul, and gives a better Sense of Duty than Severity.

365. Oppression makes a Poor Country, and a desperate People, who always wait an Opportunity to change.

Inequality creates envy which creates discord in and for government.

367. Envy disturbs and distracts Government, clogs the Wheels, and perplexes the Administration: And nothing contributes more to the Disorder, than a partial distribution of Rewards and Punishments in the Sovereign.

Be understanding and compassionate towards those who are unreasonable in their methods.

401. Some, it is true, are unreasonable in their Desires and Hopes: But then we should inform, not rail at and reject them.

406. If our Compassions must not sway us; less should our Fears, Profits or Prejudices.

407. Justice is justly represented Blind, becauses he sees no Difference in the Parties concerned.

408. She has but one Scale and Weight, for Rich and Poor, Great and Small.

Too often we see our own flaws in others, failing to see them in ourselves.

417. Nay, how ugly do our own Failings look to us in the Persons of others, which yet we see not in our selves.

Again, a different version of “judge yourself before you judge others.”

542. They must first judge themselves, that presume to censure others: And such will not be apt to overshoot the Mark.

546. Force may subdue, but Love gains: And he that forgives first, wins the Lawrel.

By forgiving others, we give ourselves peace while simultaneously taking away the person’s who wronged us.

81. Some Men do as much begrutch others a good Name, as they want one themselves; and perhaps that is the Reason of it.

Of Conduct in Speech

Ask questions without judgment in order to get to the truth of the matter.

117. Enquire often, but Judge rarely, and thou wilt not often be mistaken.

122. Speak properly, and in as few Words as you can, but always plainly; for the End of Speech is not Ostentation, but to be understood.

If you use your compassion, empathy, and patience, then helping another understand is within your ability.

124. Sense never fails to give them that have it, Words enough to make them understood.”

Of Man’s Inconsiderateness and Partiality

152. Besides, it argues great Folly in Men to let their Satisfaction exceed the true Value of any Temporal Matter: For Disappointments are not always to be measured by the Loss of the Thing, but the Over-value we put upon it.

Of the Rule of Judging

161. A reasonable Opinion must ever be in Danger, where Reason is not Judge.

164. Truth never lost Ground by Enquiry, because she is, most of all, Reasonable.

Communicate openly, honestly, and with respect. Respect is the key ingredient to make things work between those with differing opinions. In this case, I see respect as synonymous with Penn’s term, reasonably.

167. And if Men would once consider one another reasonably, they would either reconcile their Differences, or more Amicably maintain them.

Envy and jealously will eat you up inside, way more than it affects anyone else.

190. The Jealous are Troublesome to others, but a Torment to themselves.

Describing your typical know-it-all, which he attributes to vanity.

243. And yet perhaps the worst Part of this Vanity is its Unteachableness. Tell it any Thing, and it has known it long ago; and out-runs Information and Instruction, or else proudly puffs at it.