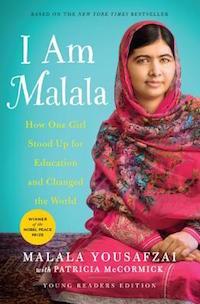 An interesting tale of courage and strength told through the eyes of a young teenage girl.

The preceding reads like a soundbite for the latest young adult action movie (like the Hunger Games), but it’s not. It’s the true story of Malala’s life as she fights for her education as well as her rights as a woman in Pakistan during the Taliban’s occupation.

I read the young adult version of her book and am glad to have done so. Originally purchased in order to share with my 12 year old daughter, I found the writing to be well done in a conversational tone. I felt like I was sitting with Malala as she unfolded the events of her young life to me.

With regard to the original (adult) version of the book, I read some comparisons that confirmed my decision to buy the YA version.

While a tragic attack on her life put Malala in the world spotlight, this is an amazing story of her courage to turn it into something positive and larger than herself. Well worth reading!