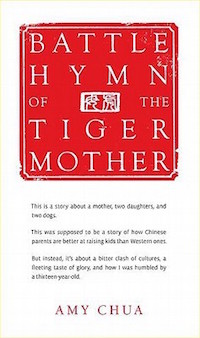 This was a thought-provoking read. Amy Chua describes the starkly contrasting differences between her parenting style, dubbed Chinese parenting, and that of most Americans. Her writing is approachable and often entertaining, even when I found myself cringing at her methods. But then, this is exactly what she wanted; to entertain the reader not instruct.

Chua tells her story chronologically, beginning with her own childhood as a daughter of Chinese immigrants for some background. She quickly moves to the birth of her first daughter and ends the story in 2010, right up to the point she finishes writing and her two daughters are teenagers. As time passes, we experience the lives of her daughters, husband, and family through her perspective. Major milestones and personal events are discussed with an openness that surprised me. In the beginning, she embraces her parenting style completely, without hesitance, and even with a bit of arrogance. This changes as her story unfolds, as noted on the book cover.

This was supposed to be a story of how Chinese parents are better at raising kids than Western ones.

But instead, it’s about a bitter clash of cultures, a fleeting taste of glory, and how I was humbled by a thirteen-year-old.

There are three things that struck me about her story.

The time and energy devoted to Sophia and Lulu, her two daughters, is beyond commendable. Actively participating in their music education by taking notes during lessons, researching various techniques to determine which was best, and learning enough to coach them herself during hours of practice every single day.

That’s right, each of her daughters practiced their instrument for multiple hours every single day, in addition to maintaining straight A’s in school. During vacations, she would find local places with a piano for Sophia to play. For several years, she would drive them to the best teachers available, even though it meant spending several hours on the road every Saturday or Sunday.

And that doesn’t count the time she spent helping them with schoolwork or other interests. That’s not to say she parented alone, her husband, Jed, was present and active as well. Chua clarifies that she was the driver behind the hours of music practice while he focused on other areas of the daughters and family.

I truly appreciate Chua’s openness and honesty in describing her parenting methods. The battles, screaming, belittling, and coercion techniques used with her daughters are extreme, in my opinion. Of course, this is the gist of the book; comparing her Chinese parenting style to Western (American) methods.

It was interesting to read about her encounters, how she handled the parenting scenarios we’ve all seen, and the many discussions, even arguments, with her husband, Jed. While they always presented a united front to their daughters, he often voiced his concerns behind closed doors. I appreciate knowing her husband’s perspective and that they worked through the disagreements.

Seeing what her parenting experience has been like gave me insight into how it shapes not only the children but the parents. Especially when doing so in America, where parenting expectations are different from her experience as the child of Chinese immigrants. She felt the constant pressure to conform to Western standards by friends and parents, yet maintained her stance for a very long time.

After reading about all the time and energy devoted to her two daughters, it dumbfounds me how she also found time to be a Yale law professor, write four books (so far), do all the other things we need to do to get by in this world, and, oh yeah, get some sleep too. It’s like she packed 36 hours into each day. I suddenly feel very lazy.

Chinese parenting is one of the most difficult things I can think of. You have to be hated sometimes by someone you love and who hopefully loves you, and there’s just no letting up, no point at which it suddenly becomes easy.

While the book raised controversy with the press and readers, initially painting Chua as that scary, harsh Chinese mom everyone’s talking about, it’s obvious to me that she used herself as a lesson to other parents. Teach your children to work hard, always give their best effort, don’t give up when it gets difficult, and do what you enjoy. That last part might not be obvious, but in the end, she supported and encouraged her daughters to pursue what they enjoy with passion and vigor.

The same advice applies to parents, be prepared to do everything you can for your children to prepare them for adult life in our world. Along with that, learn from Chua’s own epiphany. Be aware of the relationship with your child and recognize the right time to let them make their own decisions. Battle Hymn of the Tiger Mom is well worth the read for any parent.

Lastly, read 18-year-old Sophia’s response to the criticism of her mother’s parenting methods, Why I Love My Strict Chinese Mom. I only see evidence of her love and admiration for her mother, who taught her to be everything she could be in life.